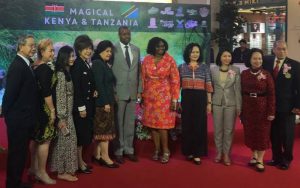 Bangkok (Thailand) – March 20, 2020 (travelindex.com) – by Imtiaz Muqbil – Prominent Bangkok-based photographer David Lau has captured the grandeur of an East African safari in a catalogue of images exhibited in Bangkok between Feb 20-23. More than just proving his professional prowess, Mr. Lau has raised the value of his artistry to a more sublime level by including reflections from a well-known Buddhist monk on the deeper wisdom embedded within.

The result makes each image an instrument of peace and understanding, both internal and external.

The exhibition of more than 100 photographs taken in the national parks of Kenya and Tanzania was held at the Siam Paragon shopping mall in central Bangkok. At the launch, guests were given a copy of a printed publication with the photographs. In his introductory message, David said he was fascinated by the amazing wildlife and cultural diversity. “The feeling of space and peace with only the sounds of birds and animals and wide-open vistas, watching those amazing animals doing what they do best in their natural environment was one of the best experiences of my life and a memory that will stay with me for a long time.

The Buddhist monk is Venerable Vajiramedhi, a highly-respected scholar and prolific writer. He says in his introduction, “Nature, Certainty of Nature and of Nature’s Laws, and Dharma. These three words are inter-related in meaning. Certainty of Nature and of Natures’ Law is Natural Law. Behaviour in accordance with Natural Law until achieving the peaceful life, that is Dharma (or Morality).” He adds, “The magnificent pictures of nature taken by David Lau likewise such a way of Dharma. Watching each picture will feel fresh, cool, relax, and delightful pleasant, similar for sense of living for nature and all of life which bring about mercy and peacefulness to be fulfilled in mind.”

In fact, Venerable Vajiramedhi’s words have universal truths; the same values and wisdoms are contained in all faiths, beliefs and indigenous cultures without exception. Each is rooted in a connection with Nature as the fundamental premise.

In an interview with this editor, David cited being in awe of a borderless world – the freedom enjoyed by animals and birds as they migrate seamlessly with the seasons. The 64-year-old lensman’s full-time job is President of DO Food Co Ltd, a catering and food supply company. Originally from Hong Kong, he has resided in Thailand for 40 years, producing earlier photographic books on Mongolia, Bhutan, the Maldives, Tibet and Yunnan Province of China. All the proceeds of his works, (36 million baht or nearly 1.25 million USD) are donated to Buddhist charities.

In her speech at the launch, Jeniffer K Njiru, Charge d’Affaires of the Kenyan embassy in Bangkok cited the potential of promoting Thai tourism to Africa. In a show of solidarity, she cited the economic, cultural and political merits of each African country with a diplomatic mission in Bangkok: South Africa, Nigeria, Sudan, Egypt, Morocco, Libya, Tunisia and Ethiopia. In turn, Thailand, too, is seeking enhanced economic and tourism linkages with Africa as part of its strategy to diversify its trade and investment portfolio and take advantage of emerging markets in that vast continent.

To promote two-way tourism, Thailand and the African countries will have to cross some basic hurdles. Only three airlines fly from Africa to Thailand (Egyptair, Kenya Airways and Ethiopian). A visa-free travel arrangement is in place only for bilateral travel between Thailand and South Africa. Asked about the possibility of visa relaxation to Kenya and other African countries, Ms Nijru said, “This is the subject of ongoing discussions.”

David Lau’s photographic brilliance proved, however, that there is much more to travel & tourism than just job creation, income generation and economic development. If the industry is to walk the talk of its claim to be a pathway to peace, it will have to strive for a higher purpose. A door is now open for national tourism boards and all forms of travel and tourism products, services and media to promote not just flora and fauna, culture and heritage but much more exalted and necessary causes such as peace, friendship and spirituality of the ecosystem.

The unique editorial-cum-philosophical approach of David Lau’s images could revolutionise not just tourism flows but the industry at large.