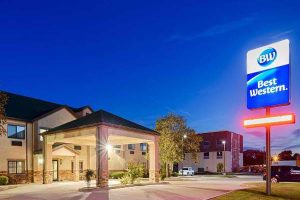 Phoenix, Arizona (United States) – January 15, 2018 (travelindex) – In a year marked by giving back, Best Western Hotels & Resorts’ hoteliers have committed approximately $1 million over the next five years in support of the brand’s charitable arm – Best Western for a Better World (BWBW). Portions of these funds were donated to the American Red Cross – the charity’s disaster relief partner – to aid victims in the aftermath of 2017’s powerful hurricanes and wildfires.

“Since our brand’s beginnings, Best Western hotel owners have felt a strong sense of responsibility to the communities in which they work and live,” said David Kong, President and Chief Executive Officer of Best Western Hotels & Resorts. “Our employees and hoteliers were deeply saddened by the wave of disasters that impacted the nation this year. I am inspired by the many heroes, including members of our own Best Western family, who mobilized to support first response efforts and bring hope and healing to disaster victims.”

The Red Cross relies on the generous donations of our corporate partners to fuel our first-response efforts and provide emergency relief to families and communities impacted by disaster,” said Kurt Kroemer, Chief Executive Officer of the Arizona American Red Cross. “We thank Best Western – along with its hoteliers and BWR members – for their steadfast partnership and financial support, which helps us provide rapid, on-the-ground services when they are most needed.”

In addition to disaster response, BWBW supports initiatives in the areas of education and poverty. Therefore, BWBW partnered with charity: water – a non-profit organization that provides clean and safe drinking water to people in developing nations – to fund water projects in the countries of Nepal and Ethiopia. The projects, completed in the spring of this year, included the construction of water infiltration and well systems, which has brought clean drinking water and handwashing stations to local children and families.

BWBW believes in the power of education to transform lives. To this end, BWBW has formed a partnership with the American Hotel & Lodging Educational Foundation (AH&LEF) in support of their Opening Doors to Opportunity campaign. One of the campaign’s primary focal areas is to offer scholarship opportunities to some of the hospitality industry’s brightest students. “We are dedicated to ensuring a strong and thriving hotel industry both now and in the future,” said AH&LEF Interim President Rosanna Maietta. “It’s partners like Best Western that make this critical endeavor possible, allowing us to identify and cultivate the leaders of tomorrow.”

Best Western Hotels & Resorts is committed to leaving a positive imprint on the communities it serves around the world. To make a donation in support of BWBW and its charitable initiatives, visit

About Best Western Hotels & Resorts:
Best Western Hotels & Resorts headquartered in Phoenix, Arizona, is a privately held hotel brand with a global network of 4,200† hotels in more than 100† countries and territories worldwide. Best Western offers 11 hotel brands to suit the needs of developers and guests in every market: Best Western®, Best Western Plus®, Best Western Premier®, Vīb®, GLō®, Executive Residency by Best Western®, BW Premier Collection®, and BW Signature CollectionSM by Best Western; as well as its recently launched franchise offerings: SureStay® Hotel by Best Western, SureStay Plus® Hotel by Best Western and SureStay CollectionSM by Best Western. Now celebrating more than 70 years of hospitality, Best Western provides its hoteliers with global operational, sales and marketing support, and award-winning online and mobile booking capabilities. Best Western continues to set industry records regarding awards and accolades, including 64 percent of the brand’s North American hotels earning a TripAdvisor® Certificate of Excellence award in 2017, Business Travel News® ranking Best Western Plus and Best Western number one in upper-mid-price and mid-price hotel brands, and Best Western receiving seven consecutive Dynatrace® Best of the Web awards for its leading hotel website. Best Western has also won nine consecutive AAA®/CAA® Lodging Partner of the Year awards, recognizing the brand’s commitment to providing exceptional service and great value to AAA/CAA’s nearly 58 million members in the U.S. and Canada. Best Western-branded hotels were top ranked in J.D. Power’s 2017 North America Hotel Guest Satisfaction Index Study – ranking first in breakfast (food and beverage category) for midscale; and second in overall guest satisfaction. Over 32 million travelers are members of the brand’s award-winning loyalty program Best Western Rewards®, one of the few programs in which members earn points that never expire and can be redeemed at any Best Western hotel worldwide. Best Western’s partnerships with AAA/CAA and Harley-Davidson® provide travelers with exciting ways to interact with the brand. Through its partnership with Google® Street View, Best Western is the first major company of its size and scale to launch a virtual reality experience for customers, setting a new industry standard and reinventing how guests view hotels.

* All Best Western and SureStay-branded hotels are independently owned and operated.
+ Numbers are approximate, may fluctuate, and include hotels currently in the development pipeline.