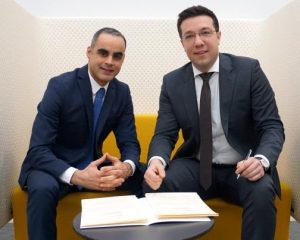 David Axiotis, General Manager of ITB China: “We are delighted to announce Europe as the first ever partner destination for ITB China. China is the driving force for growth in outbound trips and Europe as a continent remains a dream destination for many Chinese tourists. Europe as partner destination will help to better understand the needs of Chinese visitors within the European Tourism Community, especially in the view of the 2018 EU-China Tourism Year (ECTY).”

Eduardo Santander / Executive Director at European Travel Commission: European destinations acknowledge the need to remain competitive in China. It is only through deeper cooperation with the Chinese authorities and the support and commitment of the European tourism sector to engage in joint public-private marketing initiatives, like this partnership with ITB China, that Europe will succeed in fostering sustainable tourism growth from China”.

A dedicated Europe Pavilion at ITB China will be showcasing the multitude of European tourism products and destinations among which are confirmed national presences of Czech Republic, Belgium, Hungary, Estonia, Latvia, Lithuania and Serbia. In addition to the Europe pavilion, ITB China will show strong individual presences of other major European destinations such as Portugal, Finland, Greece and Austria.

The European presence on the show floor is flanked by The World Bridge Tourism project (WBT), which is co-located with ITB China 2017. The WBT is a project jointly organized by the European Travel Commission (ETC) and the European Tour Operators Association (ETOA) matching 150 European tourism suppliers from all over Europe with the corresponding number of Chinese travel product buyers. Besides its pure B2B character the event is supported by an extensive program of research and webinars aimed at increasing the understanding of the needs of Chinese visitors within the European Tourism Community.

Tom Jenkins, CEO of The European Tour Operators Association says: “We are looking forward to working together with the European Travel Commission and ITB China. China’s desire to travel abroad remains unbroken and European interest in accommodating Chinese visitors is growing. This initiative is designed to help European suppliers understand the needs of the Chinese market and deal directly with the main players.”

Both initiatives the Europe Pavilion at ITB China and the World Bridge Tourism have the support of the European Union.

ITB China will take place from 10 to 12 May 2017 at the Shanghai World Expo Exhibition and Conference Center. The event, an international offshoot of one of Messe Berlin’s most successful trade fairs, will take place annually and focus on the Chinese travel industry. Its co-organiser is TravelDaily China, a leading online news portal and organiser of travel industry conferences in Asia’s largest country.

About ITB Berlin and ITB Asia
First launched 50 years ago, ITB Berlin is recognised as the most successful trade show for the global travel industry. Some 10,000 exhibitors from more than 180 countries regularly attend this event. Every year in October for the last eight years Messe Berlin has successfully organised ITB Asia in Singapore. Boasting 760 exhibitors from 73 countries, ITB Asia in Singapore has established itself as one of the leading travel trade shows in Asia. As the second show in Asia, ITB China will take place in Shanghai, one of the leading industrial cities in the People’s Republic of China, and with a population of around 23 million one of world’s largest cities. In contrast to ITB Asia, which reflects tourism in Asia as a whole, ITB China focuses entirely on the Chinese travel market.

About World Bridge Tourism
World Bridge Tourism (WBT) is a project supported by the European Union, in order to increase the flows of visitors from China to the EU. WTB Shanghai will be held in conjunction with ITB China on the 9th-10th May 2017. The programme combines a conference and a B2B workshop between tourism-related EU companies (particularly SMEs) and Chinese operators. The project will be supported by an extensive programme of research and webinars aimed at increasing the understanding of the needs of Chinese visitors within the European tourism community. WBT Shanghai will be the curtain raiser for a major initiative that will take place the following year: the 2018 EU–China Tourism Year. During that year an unprecedented level of attention will be paid to the growing importance of China as an origin market, and the changing preferences and behaviour patterns of Chinese visitors.