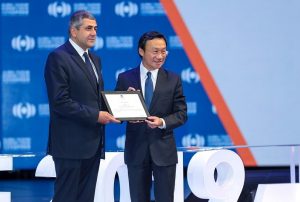 Macao (Macao SAR) – October 15, 2019 (travelindex.com) – The Global Tourism Economy Forum (GTEF or the Forum) was unveiled with an opening ceremony today. Centered on the concept of “Beautiful Life” raised by President Xi Jinping, the Forum is leading forward-thinking discussions on the global tourism economy under the theme “Tourism and Leisure: Roadmap to a Beautiful Life”. The two-day Forum in Macao has lined up industry leaders and experts to share insightful perspectives in an array of sessions. The “GTEF ∙ World Tourism Investment and Financing Conference” was also launched in this edition, inspiring delegates to explore new possibilities in the tourism markets along the Belt and Road and across the Guangdong-Hong Kong-Macao Greater Bay Area. The Forum also deepened its collaboration with the World Tourism Organization (UNWTO) by bringing the finale of the “UNWTO Tourism Tech Adventure: SportsTech” to Macao for the first time, to foster reform and innovation in the tourism value chain.

Hosted by the Secretariat for Social Affairs and Culture of the Macao Special Administrative Region Government, the 8th edition of GTEF engaged close to 2,000 participants including ministerial officials of tourism and related fields, industry leaders, experts, scholars and participants from various countries and cities across the globe, along with delegations from GTEF 2019 Partner Countries Argentina and Brazil, as well as Featured Chinese Province Jiangsu.

The opening ceremony was officiated by distinguished guests including Chief Executive of the Macao Special Administrative Region, Chui Sai On;Vice Chairman of the National Committee of the Chinese People’s Political Consultative Conference and Forum Chairman of GTEF, Ho Hau Wah; Director of the Liaison Office of the Central People’s Government in the Macao Special Administrative Region, Fu Ziying; Secretary-General of World Tourism Organization (UNWTO), Zurab Pololikashvili; Executive Vice Chairman of All-China Federation of Industry and Commerce (ACFIC), Xu Lejiang; Commissioner of the Office of The Commissioner of the Ministry of Foreign Affairs of the People’s Republic of China in the Macao Special Administrative Region, Shen Beili; Minister of Tourism of the Secretariat of State for Tourism of Argentina, Gustavo Santos; Minister of Tourism of Brazil, Marcelo Álvaro Antônio; President of Bahrain Authority for Culture and Antiquities, Shaikha Mai Bint Mohammed Al Khalifa; Union Minister of Hotels and Tourism of Myanmar, U Ohn Maung; Director-General of Dar Al-Athar Al-Islamiyyah and Co-owner of The Al-Sabah Collection, Sheikha Hussa Sabah Al-Salem Al-Sabah;Vice Minister of Ministry of Culture and Tourism of the People’s Republic of China, Zhang Xu; Chairperson of China Council for the Promotion of International Trade (CCPIT), Gao Yan; Vice-Governor of the People’s Government of Jiangsu Province, Wang Jiang; Permanent Secretary of State of the Ministry of Tourism for the Kingdom of Cambodia, Tith Chantha; Executive Director of UNWTO,Zhu Shanzhong; Secretary for Social Affairs and Culture of the Macao SAR Government and Executive Chairman of GTEF, Alexis Tam; Vice Chairman and Secretary-General of GTEF, Pansy Ho; Regional Director for Asia and the Pacific of UNWTO, Xu Jing, among other personages.

Vice-Chairman of the National Committee of the Chinese People’s Political Consultative Conference and Forum Chairman of GTEF, Ho Hau Wah, expressed in his welcome speech, “The 8th edition of the Forum convenes under the theme ‘Tourism and Leisure: Roadmap to a Beautiful Life’. Capitalizing on our unique strategic role as ‘one centre, one platform and one base’ in this momentous year when China celebrates respectively the 47th and 45th anniversaries of the establishment of diplomatic relationships with Argentina and Brazil, Macao, in organizing the Forum, partners with the economically-vibrant province of Jiangsu as our Featured Chinese Province, and deepens our Country’s aligned partnerships with Argentina and Brazil in the Belt and Road Initiative, to further push forward tourism and economic exchange and cooperation between China and Latin American countries.”

Chief Executive of the Macao SAR, Chui Sai On, stated in his welcome remarks, “The Central Government has bestowed huge continuous support upon Macao in our move forward. Right now, we are here to seize the significant opportunities brought by the national developments along the Belt and Road and in the Guangdong-Hong Kong-Macao Greater Bay Area, and align Macao’s development with the country’s prospects, as we march into the future with our unyielding dedication to build Macao into a ‘world center of tourism and leisure’, a ‘commercial and trade cooperation service platform between China and Portuguese-speaking countries’, as well as a ‘base for exchange and cooperation, where Chinese culture prevails and different cultures,  flourish in harmony’.” He also pointed out that with the Country’s strong support, the Forum is an advanced platform for international exchange and cooperation in tourism, and leverages Macao’s institutional, cultural and geographical advantages to push forward sustainable tourism and economic development.

Secretary-General of UNWTO, Zurab Pololikashvili, highlighted in his opening remarks, “Tourism is not just about numbers and economic benefits. It is also about healthy lifestyles and the well-being of society, echoing the theme of 2019 GTEF on how tourism and leisure lead to a better life.”

During the opening ceremony of GTEF, the “Ceremony of Appreciation for Macao SAR’s Contribution to Human Capital Development in Tourism – UNWTO and Macao SAR Joint Initiatives Report and Letter of Appreciation Presentation” was held. Secretary-General of UNWTO, Zurab Pololikashvili, presented a Letter of Appreciation to Secretary for Social Affairs and Culture of the Macao SAR Government, Alexis Tam, for the latter’s contribution to the development of human capital in tourism worldwide. The Letter made special reference to the training programs offered to participants from UNWTO member states by the Global Centre for Tourism Education and Training at the Macao Institute for Tourism Studies (IFT), in collaboration with UNWTO. In addition, Alexis Tam delivered to UNWTO a report on the initiatives and achievements of the IFT Global Centre for Tourism Education and Training by far.

The program of GTEF 2019 features a range of discussion panels, special interviews as well as concurrent activities including exhibitions, business matching, networking sessions and more. The Day-one program unveiled in order with a range of highlights including the first “GTEF ∙ World Tourism Investment and Financing Conference: Tourism Investment and Cooperation in the Global Multilateral System”; the signature “Face to Face – Ministers and Private Sector CEOs” session in collaboration with UNWTO under the topic of “How Tourism, Leisure and Sports Lead to a Beautiful Life”, which led a high-level dialogue between ministerial officials and global private-sector CEOs from worldwide around the topics of cultural, sports and wellness tourism; press conference by Partner Countries Argentina and Brazil; as well as destination presentations. The program will continue with diverse highlights on the second day, including presentation of the sixth Joint Research Report on Asia Tourism Trends by UNWTO and the Global Tourism Economy Research Centre (GTERC), as well as a range of discussion panels, among other sessions.

The Forum is dedicated to radiating an increasingly far-reaching impact as an advanced platform for international tourism exchange and cooperation. Capitalizing on Macao’s role as a bridge that connects different peoples and enhances cooperation between China and the world, as well as a strategic tourism hub in the Guangdong-Hong Kong-Macao Greater Bay Area, the Forum strives to enhance the sustainable development of the global tourism industry with a special focus on China, and guide global tourism stakeholders to unlock new opportunities across China and the Greater Bay Area. At this high time that marks the dual celebrations of the 70th anniversary of the Founding of the People’s Republic of China and the 20th anniversary of the Establishment of the Macao Special Administrative Region, and riding on the new development opportunities brought by the launch of the Outline Development Plan for the Guangdong-Hong Kong-Macao Greater Bay Area, delegates join hands to explore and shape a new landscape for the tourism ecosystem.

About the Global Tourism Economy Forum
The Global Tourism Economy Forum (GTEF) is hosted by the Secretariat for Social Affairs and Culture of the Macao SAR Government, in collaboration with World Tourism Organization (UNWTO), co-organized by the China Chamber of Tourism under the authorization of All-China Federation of Industry and Commerce (ACFIC), co-organized by Macao Government Tourism Office (MGTO), and coordinated by Global Tourism Economy Research Centre (GTERC). GTEF’s supporting units include the Ministry of Culture and Tourism of the People’s Republic of China, All-China Federation of Industry and Commerce (ACFIC), the Liaison Office of the Central People’s Government in the Macao SAR, Office of the Commissioner of the Ministry of Foreign Affairs of the People’s Republic of China in the Macao SAR, World Travel and Tourism Council (WTTC), Pacific Asia Travel Association (PATA), World Tourism Cities Federation (WTCF) and European Travel Commission (ETC).

Since its inception in 2012, GTEF has successfully established itself as an influential high-level cooperation platform to promote sustainable development in the global tourism industry with a focus on China. To date, GTEF had received more than 10,783 participants from 89 countries and regions, including delegations from 147 provinces and cities of Mainland China; and 570 internationally renowned speakers.