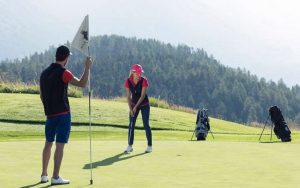 St. Moritz (Switzerland) – June 20, 2019 (travelindex.com) – The Kulm Hotel St. Moritz is offering golfers who love music a perfect holiday combination this summer with a range of stay and play packages that coincide with the annual Festival da Jazz, which takes place in St. Moritz from July 4 to August 4.

During the day, golfers can take to the fairways of the Engadine Valley, one of the most spectacular places to play golf thanks to stunning Alpine panoramas of verdant valleys and dramatic mountain backdrops, whilst in the evening they can enjoy a wide spectrum of performances to suit all tastes at the Festival da Jazz.

The two or three-night golf packages offer unlimited access to the 9-hole Kulm Golf St. Moritz within the hotel’s grounds and one complimentary green fee either at Samedan, which recently celebrated its 125th anniversary or at the nearby course at Zuoz. Daily breakfast buffet and Gourmet Dine Around (halfboard) are also included, whilst all Kulm guests have unlimited access to the hotel’s extensive spa facilities and tennis courts as well.

As one of the official hosts of the Festival, the Kulm Hotel is staging many of the shows within its grounds at the legendary Dracula Club and free intimate after-show sessions at its Sunny Bar, Switzerland’s oldest sports bar, which is the perfect spot for a nightcap while listening to great live music.

The Kulm Golf St. Moritz, established back in 1891 as the first 9-hole course in Switzerland, weaves its way in and out of pine forests and along a section of the Olympic Bobsleigh, run whilst several tees give breathtaking vistas over Lake St. Moritz and beyond.

Samedan, opened in 1893, is a classic parkland course with a touch of links that in the main runs along the valley floor, although the course does offer some gently undulating holes. It is characterized by broad fairways flanked by ancient, giant larch trees, some of which are over 700 years old, whilst numerous water hazards made up of ponds and streams ensure it is a testing challenge of golf. Samedan is just a 10-minute drive from the Kulm Hotel St. Moritz.

In 2003, these two courses were joined by the Zuoz-Madulain layout – or simply Zuoz – just a  20-minute drive from St. Moritz. Despite being a relatively young course, the combination of testy undulating fairways, multiple elevation changes, receptive greens and its attractive setting within alpine meadows and thick pine forests have made it extremely popular with golfers.

The Kulm Hotel golf package options, where prices for a two-night stay start from CHF580 per person and for three nights from CHF810 per person (available until September 1), include: · 2 or 3 nights, including sumptuous breakfast buffet and daily Gourmet Dine Around (half-board) · Complimentary green fees at the 9-hole Kulm Golf St. Moritz

*valid on request and subject to availability; additional nights can be booked with price on request; a surcharge of CHF25 will apply over the weekend (Friday and Saturday).

Kulm Golf St Moritz
The nine-hole Kulm Golf St. Moritz course, first laid out in 1891, meanders harmoniously through the town, past the St. Moritz bobsleigh run and the former Olympic Stadium (two winter Olympics have been held on the course, in 1928 and 1948), while enjoying spectacular views over Lake St. Moritz. Lying at a height of 1,860 metres, this demanding par 27 course is among the highest in Europe and was re-laid in 2001 to bring it up to date for the needs of today’s golfers.

In addition to the course, the Club has a practice putting green and a driving range, as well as its own Club restaurant “Chesa al Parc”. An integral part of the offering at the Kulm Golf St. Moritz is the Academy, where beginners can discover the fascination of golf and seasoned players can improve their technique. Our experienced pros are on hand to provide individual instruction to guests, making use of state-of-the-art technical and audiovisual aids.

Kulm Hotel St. Moritz was the first hotel to be built in St. Moritz. The Kulm Hotel opened its doors in 1856 and immediately became popular for summer spa and painting holidays, particularly among the British who comprised around 75% of the hotel guests. The then owner of the Kulm Hotel, Johannes Badrutt, initiated winter holidays to St. Moritz from 1864 and, as a result, the hotel, resort and Switzerland itself celebrated 150 years of winter tourism in the 2014/15 season.

Since the 19th century, the Kulm Hotel has changed considerably through expansion and renovation, but the fabulous location at the heart of St. Moritz with views over the Lake remains the same. A member of The Leading Hotels of the World, Kulm Hotel St. Moritz has 164 rooms, five restaurants (including formal dining in the Grand Restaurant, the Italian Pizzeria with 13 Gault Millau points and local Engadine specialities at Chesa al Parc), the extensive  Kulm Spa St. Moritz (with a 20 m indoor pool with underwater music, various saunas and steam room, a Jacuzzi, a fully-equipped gym and treatment rooms, all with stunning views over Lake St. Moritz) and six conference rooms, with capacities ranging from 50 to 500 people.