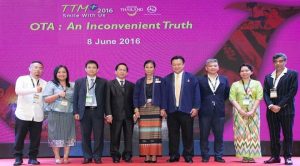 Bangkok (Thailand) – April 12, 2017 (travelindex.com) – The Thailand Travel Mart 2017 Plus Amazing Gateway to the Greater Mekong Subregion (TTM+ 2017) is on track to report a record turnout of buyers when it is held between 14 – 16 June, 2017, in the Chiang Mai International Exhibition and Convention Centre (CMECC).

Although final numbers will be established closer to the actual date, so far it is the highest turnout ever, well above the 343 buyers in 2016 and the 440 buyers in 2008.

Mr. Yuthasak Supasorn, Governor of the Tourism Authority of Thailand (TAT) said, “This is a clear indication of the high level of interest in Thailand and Northern Thailand in particular. We are now finalising some very interesting events, activities and tours for the buyers which I am sure will go a long way towards helping them better promote Chiang Mai and Northern Thailand to their clients.”

Now in its 16th consecutive year, this year’s TTM+ will be held under the theme concept, “Delivering Unique Experiences”.

The event will be opened on 14 June at 13.30 – 14.00 Hrs. followed by the forum for Sellers and Buyers and then Local Tourism Product Presentation. The trade show will be held 14-17 June at the CMECC.

The decision to maintain Chiang Mai as the venue of the TTM+ for the second consecutive year was designed to ensure that buyers and media get yet another chance to explore the many unique emerging cultural and natural attractions of North Thailand and the border countries of Myanmar and Lao PDR.

It is also part of the TAT’s strategy to better balance the distribution of visitors nationwide. Although the vast majority of visitors head for Thai beach resorts along the southern and eastern coastlines, the future potential lies in the North and Northeast Thailand region, which is set to offer its connecting routes to the neighbouring countries of Cambodia, Lao PDR., Myanmar, and Vietnam.