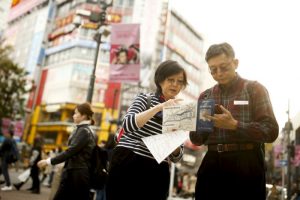 Madrid (Spain) – July 15, 2017 (travelindex.com) – International tourist arrivals worldwide grew by 6% in January-April of 2017 compared to the same period last year, with business confidence reaching its highest levels in a decade. Sustained growth in most major destinations and a steady rebound in others drove results. Prospects for May-August 2017 remain high.

Destinations worldwide received 369 million international tourists (overnight visitors) in the first four months of the year, 21 million more than in the same months of 2016 (+6%), according to the latest UNWTO World Tourism Barometer. The January-April period usually represents some 28% of the yearly total and covers the winter season of the Northern Hemisphere and the summer season of the Southern Hemisphere, as well as the Chinese New Year and Easter holidays, among others.

International arrivals reported by destinations around the world were positive overall, with very few exceptions. Most of 2016’s strong performers maintained momentum, while destinations that struggled in previous years continued to rebound in the first part of 2017. This is especially reflected in the better results of the Middle East (+10%), Africa (+8%) and Europe (+6%). Asia and the Pacific (6%) and the Americas (+4%) continued to enjoy robust growth.

“Destinations that were affected by negative events during 2016 are showing clear signs of recovery in a very short period of time, and this is very welcoming news for all, but particularly for those whose livelihoods depend on tourism in these destinations”, said UNWTO Secretary-General Taleb Rifai.

“As we celebrate 2017 as the International Year of Sustainable Tourism for Development, we welcome the continued development of tourism and recall that with growth comes increased responsibility to ensure tourism can contribute to sustainability in all its three pillars – economic, social and environmental. Growth is never the enemy and it is our responsibility to manage it in a sustainable manner,” he added.

Regional Results
International arrivals in Europe (+6%) rebounded in January-April after mixed results last year, as confidence returned to some destinations that were impacted by security incidents, while others continued to grow strongly. Results improved particularly in Southern Mediterranean Europe (+9% as compared to +1% in 2016) and Western Europe (+4% as opposed to +0% in 2016). Northern Europe (+9%) continued to record strong growth, while Central and Eastern Europe recorded 4% more international arrivals, in line with results of last year.

In Asia and the Pacific, international arrivals were up 6% through April with sound results across all four subregions. South Asia (+14%) led growth, followed by Oceania (+7%), South-East Asia (+6%) and North-East Asia (+5%).

International arrivals in the Americas were up 4% with strong results in South America and Central America (both +7%), while arrivals in North America grew by 3% and in the Caribbean by 2%.

Positive prospects for May-August
The current strong momentum is reflected in the UNWTO Panel of Tourism Experts confidence index, based on evaluations and prospects of worldwide experts surveyed every four months since 2003. Experts evaluated tourism performance in the first four months of 2017 with the highest score in 12 years, clearly exceeding their already positive expectations from the start of the period. Responses to the survey were strongest from Europe, in line with the rebound in arrivals.

Experts also show strong confidence in the current May-August period, as their prospects are the most optimistic in a decade, also driven by upbeat expectations in Europe. The May-August period includes the peak tourism season in most of the world’s major tourism destinations and source markets.