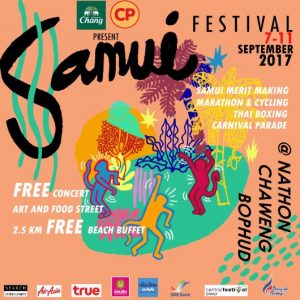 Mr. Auaychai mentioned the progress in preparing the event that more than 80 percent of the progress has already done and it was co-sponsored by Thai Search Entertainment Company, ThaiTV3.

In addition, on the 7th, the opening day, private hotel entrepreneurs in the Samui led by Mr. Aumnad Chodchaung collaborated with the school group and government agencies to organize carnival procession, 12 flower carriages with more than 1,000 participants. The procession will begin on 2:00 pm to 5:00 pm to Nathon to enter the opening ceremony. Mr. Somkid Jatusripitak, Deputy Prime Minister will be the president of the ceremony and the event will be broadcasted live on 3SD Channel.

For the event on September 9th, the morning event will be a running competition “Samui Festival Marathon 2017” The winner will receive General Prayut Chun-O-cha, Prime Minister’s trophy. Mr. Thanongsak Thawithong, President of Surat Thani Provincial Administrative Organization, as the tournament director, stated that the marathon activities targeted for 3,000 persons in total.

Samui Festival Marathon, runners will be released at 4:00 am in the morning of September 9th and finish all competitions at no more than 11.00 am, the 42 km runners who reached the first 100 will receive an Angthong Islands trip from the Tourism Authority of Thailand, Koh Samui office, as a special prize and the first 300 will receive a Marathon Finisher T-shirt as a prize.

On the afternoon of September 9th, there will be the largest beach buffet in the world for free under the name “Massive buffet on Chaweng Beach” with a length of 2600 meters and over 10,000 dishes at Chaweng beach, Bo Phut. The buffet dinner received cooperation from the entrepreneurs of hotels, shops, communities and the citizen in the Samui area in order to thank to the Thai and foreign tourists who always visit Koh Samui. This event also coordinated with Guinness World Records to break the record of the largest buffet in the world. The buffet will be opened for free from 5pm onward.

The winners of the overall male and female marathon, mini marathon, Tour of the Samui cycling competition; 50 km male-female road bike and 50 km male-female mountain bike will be honored with the Prime Minister Prayut Chayo-O-cha’s trophy, which is designed and crafted by the top tier artists Mr. Sakwut Wisetmanee who was born at Ban bang Kao, Koh Samui. The trophy is inspired by the concept of “wings of victory”, waves of the sea and sunshine are included as elements. Depicting the picture of crossing obstacles in the race until finally won. The trophy is specially cast with a bronze metal which makes it a 14.5 kg in weight.

For both types of athletic applications, you can visit the website. www.samuifestival.com

In addition to the above activities, Samui Festival 2017 also features Art Lane, which invites artists to create works of art, accompanied by music in every stage led by Ajarn Ammarit Chusuwan, Sakwut Maneejit, Wisetmanee jitsing Sombun, Chalit Nakpawan and also a selection of store by various government agencies such as Government Savings Bank, SME Bank, Ministry of Commerce, TAT and many other agencies.

“This year, we have a lot of stores than last years. There are more than 500 stores; general stores, local entrepreneurs, and OTOP community enterprises from both Surat Thani and neighboring provinces. There will be famous actors from Channel 3 to provide a variety of entertainment and the bands such as Body Slam, Joey Boy, Potato, etc.