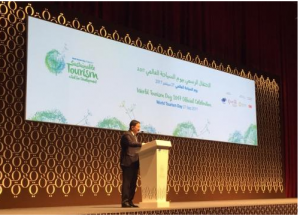 Doha (Qatar) – September 28, 2017 (travelindex.com) – Celebrated worldwide since 1980, World Tourism Day is commemorated on 27 September. This year, the Official Celebrations are held in Doha, the capital city of Qatar.

To advocate the potential of sustainable tourism as a tool for development. This is one of the goals of the World Tourism Day celebrations that are being conducted throughout the world. The Official Celebrations taking place in Qatar, the second celebrated in the country that hosted the event in 2005, convene tourism ministers, industry entrepreneurs and researchers, among other key actors in the sector. The event was opened by the Prime Minister and Minister of Tourism of Qatar, H.E. Sheikh Abdullah bin Nasser bin Khalifa Al Thani, who emphasized the performance of Tourism and the links of the sector with the 17 Sustainable Development Goals as well as its potential in economic diversification.

As stated by UNWTO Secretary General, Taleb Rifai, “as we celebrate World Tourism Day 2017 the question is how we can enable the powerful global transformative force of tourism to contribute to make this world a better place and to advance sustainable development in all its five pillars: Economic, Social, Environmental, Cultural and Peace”.

“Tourism has been recognised by our country’s leadership as a tool for sustainable development, and has been designated one of the priority sectors in the nation’s pursuit of economic diversification. We are particularly honoured to have been joined by high-level members of the international tourism community in Doha for the official celebration of World Tourism Day, which witnessed the launch of the Next Chapter of Qatar’s Tourism Sector Strategy. As we continue on this journey, we look forward to sharing our destination with more visitors, investors and tourism professionals,” said Hassan Al Ibrahim, Chief Tourism Development Officer at the Qatar Tourism Authority (QTA).

The official celebrations of World Tourism Day 2017, the second celebrated in Qatar that hosted the event in 2005, convene tourism ministers, industry entrepreneurs and researchers, among other key actors in the sector.

“For an industry that produces 10% of global GDP and 1 in 10 jobs globally, it is crucial we protect the growth to be sustainable. This International Year of Sustainable Tourism for Development should create a legacy based on three key aspects: better management to protect from impacts of T&T, continue working closely together as partners, not just UNWTO and WTTC, but private and public sectors across destinations and countries and to tell the stories, share the inspiration, keep talking about it,” mentioned Helen Marrano, Helen Marano, Senior Vice President at the World Travel and Tourism Council (WTTC), at the Opening of the event.

The Celebrations include a Keynote Speech on ‘Aviation’s Role in Building Sustainable Tourism’ given by Akbar Al Baker, Global CEO of Qatar Airways and a High Level Think Tank on ‘Tourism as a means for creating opportunities, enhancing cultural preservation and mutual understanding’ moderated by Max Forster from CNN International. The session addresses the capacity of tourism to create jobs and bring new opportunities to communities as well as the contribution of the sector to wealth creation, investment and exports.

“Tourism has been recognised by our country’s leadership as a tool for sustainable development, and has been designated one of the priority sectors in the nation’s pursuit of economic diversification,” said Hassan Al Ibrahim, Chief Tourism Development Officer of QTA.

As the role of communications within the tourism sector is of high relevance, a key note speech is offered by Tom Hall, Editorial Director of Lonely Planet on the value of Communicating tourism for Development. This leads to a Special Session on “Tourism and the Planet: committed to a greener future”.